Hydroponics, from the Greek water (hydroelectric ) and labor (ponos, is the name given to the system of growing plants without the need for soil (earth) as a growth medium. The plants are in direct contact with water or extremely humid air, which contains the additive of nutrients necessary for the development of the plant.

But is it possible to create plants without soil? Not only is it possible, but the plants also grow much better and faster within this methodology. Many of the foods we consume in our daily lives are already grown hydroponically.

Many past civilizations have used hydroponic growing techniques throughout their history. The hanging gardens of Babylon, the floating gardens of the Aztecs of Mexico, and those of the Chinese are examples of successful hydroponic cultivation. Egyptian hieroglyphic records dating back several hundred years BC describe the growth of plants in water. As noted, hydroponics is an ancient method of growing plants, but gigantic strides have recently been made in this “innovative” area of ​​agriculture.

One of the applications that prompted the adoption and research of hydroponics that he fueled was the cultivation of fresh produce in inhospitable parts of the world, with little or no fertile soil for cultivation. Hydroponics was widely used during World War II to supply troops assigned to the Pacific islands, which have little or no land for planting, so through hydroponic systems, it was possible to grow fresh produce in these places.

Hydroponics was also integrated into the space program, during the space race NASA saw hydroponics as a perfect and easy fit for their plans for sustainability of life in space. So as early as the 1970s, it was no longer just scientists and analysts who were involved with hydroponics, traditional farmers and hobby enthusiasts began to be attracted to the virtues of hydroponics.

Many people when they hear the topic of hydroponics, quickly associate themselves with the cultivation of Cannabis, because this is what made this technique popular in modern times. Because it is still a banned plant in many places, hydroponics was the perfect, easy, and “hidden” way to grow plants indoors and away from the eyes of the authorities. 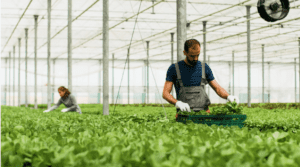 How Does Hydroponics Work?

Before understanding how hydroponics works we need to understand how plants grow and develop. Plants grow through a process called photosynthesis, in which they use sunlight and chlorophyll (a chemical found in leaves) to convert carbon dioxide and water into glucose (an energy source) and oxygen. It also needs non-mineral nutrients (hydrogen, oxygen,…), macronutrients (phosphorus, calcium, magnesium, sulfur,…), and micronutrients (chlorine, manganese, iron,…).

In a land planting system, macro and micronutrients are present in the soil and reach the roots of the plants, and non-minerals are present in the water and atmospheric air. In a hydroponic system, macronutrients are added directly to the water, which in turn is in contact with the root of the plants, serving as a means to take up all the non-minerals and minerals necessary for the plant.

With hydroponics, there is also the possibility of growing plants without the need for sun, popularly called “indoor” cultivation, through special lamps the necessary light is provided to the plants.

Hydroponics has several advantages over soil cultivation, we can list some of the main ones:

There are various hydroponic growing mediums, we are going to talk about all of them in more detail soon, for now, let’s look at the simplest and most popular system:

An absorption system is the most basic type of hydroponic system that can be built. This is the system used for thousands of years, like the gardens of Babylon.

It’s known as passive hydroponics, which means you don’t need air or water pumps to use it. Nutrients and water are moved to the root zone of the plant using a wick, which is usually something as simple as a string or a piece of felt.

The key to success in the absorption system is to use a growing medium that transports water and nutrients well, such as cocoa, perlite, or vermiculite.

These systems are good for smaller plants that don’t use a lot of water or nutrients. Larger plants may have difficulty getting enough through this system.

The nutrient film technique is often used to grow smaller, faster-growing plants such as different types of lettuce. In addition to lettuce, commercial growers also use this system to grow children’s herbs and strawberries.

There are several ways to design a nutrient film technique system; however, they all follow the design of a very shallow nutrient solution flowing through the tube. The bare roots of plants absorb nutrients from solutions when they come into contact with water.

This system consists of a reservoir with water and nutrients, a water pump responsible for circulating in the system, a medium where the plants will be suspended, usually a pipe or a tray, where the suspended plants with exposed roots come into contact with this small flow of water + nutrients. The plants absorb what they need and then there is a drop of water back into the reservoir and that is also responsible for the oxygenation of the water.

In a DWC system, a reservoir is used to hold the water and nutrient solution. The roots of the plants are immersed in this solution so that they receive a constant supply of water, oxygen, and nutrients.

To oxygenate the water, an air pump is used with an air stone that pumps bubbles into the nutrient solution. The plants are usually housed in perforated pots with some means of accommodating the plants, usually clay pebbles, phenolic foam, or coconut shells.

Drip systems are very similar to the NFT system, the only difference is that instead of the water supplying the constant flow of water, the nutrient solution is seized and pumped directly into the base of each plant system.

Well, we learned a little more about hydroponics and its advantages, some may be wondering what this has to do with a technology blog? Well, this is the first article in a series that I want to show about a hydroponic garden that I built in my parents’ house, in addition to all the technology behind cultivation, with the help of automation I managed to create a practically 100% automated garden and I decided to share this experience with you.

link to Pros And Cons Of Hydroponic Farming

Pros and cons of hydroponic farming! Hydroponic farming is a type of agriculture that does not use soil. Plants are grown in water and nutrients are delivered to them through the water. This type of...

This site is a participant in the Amazon Services LLC Associates Program, an affiliate advertising program designed to provide a means for sites to earn advertising fees by advertising and linking to Amazon.com. We are compensated for referring traffic and business to Amazon and other companies linked to on this site.